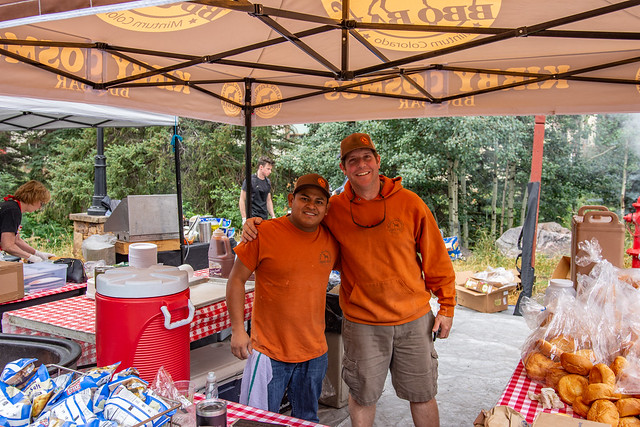 The word “barbeque”. (also barbecue, BBQ, Bar-B-Que, & in Aussie style, barbie) is defined as a method and apparatus for cooking food, often meat, with the heat and hot gases of a fire, smoking wood, or coals of charcoal. During the 19th century, pigs were considered a low-maintenance food source that could forage for themselves and then be caught and eaten, and barbeque revolved around the cooking of pork. Prior to the Civil War, Southerners ate around five pounds of pork for every one pound of beef, every piece and part as well!! Because of the effort it took to capture and cook these pigs, it was considered a time of celebration and whole neighborhoods would be invited to share in the largesse. These feasts were called “pig-pickin’s,” and Southern barbeque grew out of these gatherings. At Kirby Cosmo’s, every day is a pig-pickin’ and the whole neighborhood is always welcomed to join! Our BBQ hails from Asheville, NC and Greenville, SC, where the first JB’s BBQ restaurants originated. When JB opened up shop in Minturn, Coloradoans and visitors alike got the taste for this original sauce and tasty meats. The Tamberino family has since put their spin on things with a new name and look, plus a full bar and expanded menu. Kirby Cosmo’s still cooks up the same great BBQ and now much more! So sit back, relax, and roll up your sleeves. We hope you’ll enjoy!